It’s been a couple of weeks now since I’ve posted a recipe.  Night shift has it’s drawbacks.  Cooking in the middle of the night  tip toeing around like Twinkle Toes is not easy.  I thought I would share this recipe for Creamy Chicken and Corn Chowder with you , because it is yet again an easy one to make when time is limited, and if you cook up some extra chicken you can use it the next day to make Ruth’s Smokey Chicken and Potato Salad. 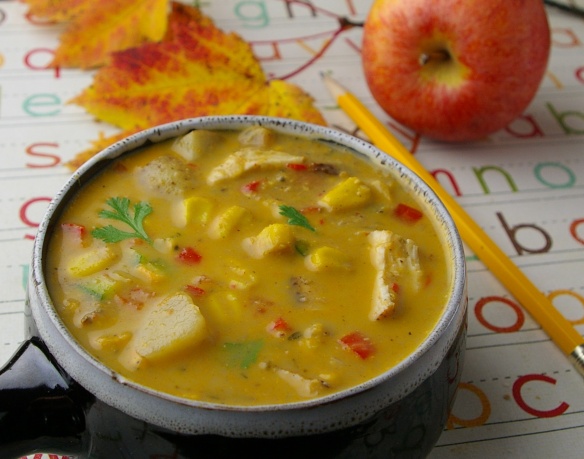 The weather has been so nice here that we just couldn’t resist going for a drive up the highway to look at the fall colors .   When we venture into the wilderness, something magical happens, any stress or anxiety you may have will immediately disappear, and leave you feeling refreshed and ready to take on the world! 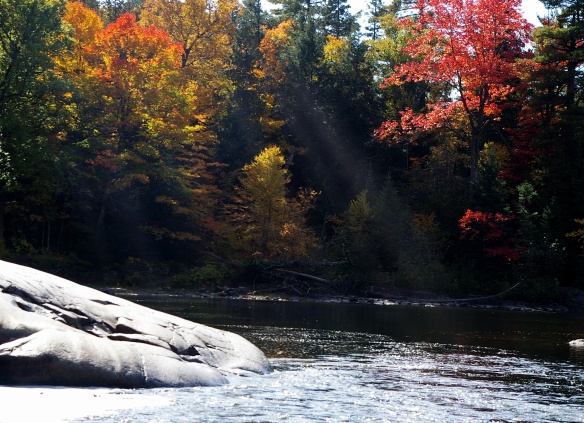 Cook bacon on medium heat in a large cooking pot until it is nice and crispy. Remove from heat, and let drain on a paper towel.  Pour off most of the fat from the pot except 2 tbsp, and add the onion, potato,corn, red pepper, jalapeno, salt and pepper to taste.  If using store bought chicken broth , I find this has alot of sodium already in it , so just be careful not to put too much you and always put more in , but you can’t take it out if you put too much salt in .  Cook for 10 minutes.  Add the thyme, and stir well.

Remove from heat.  Puree half of  the mixture in a blender with 1/4 cup of the broth, and add back to the pot, and add the milk, chicken broth, and the chicken.  Let simmer on med low, for 5 minutes.

The bacon and cilantro are for the garnish , you can add a piece of lime to the garnish as well.